Historically, Italy has been among the most pro-European countries in Europe. However, over the last few years, euroscepticism, for a lack of a better word, has gained ground. Surprisingly, the latest Eurobarometer reveals that Italians are now more eurosceptic than British citizens, who decided five months ago to leave the European Union in a very controversial referendum. According to the poll, just 33% of Italians think that Italy’s membership of the EU is a “good thing”, compared to a 53% EU average and 47% of British citizens. 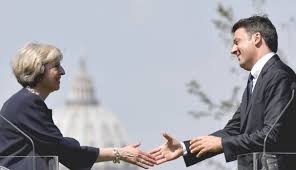 Moreover, 38% of Italians say that Italy has “on balance” benefited from being a member of the EU. This compares to 60% of EU citizens on average and 56% of British citizens. The EU poll published Nov 18 is based on 27,768 interviews (of which 1,016 interviews in Italy) conducted between Sep 24 and Oct 3. Figures are indeed surprising. Now, how is this possible? One explanation is that the economic crisis is finally taking a toll on Italy’s pro-Europe attitude. Youth unemployment has been high for years now, the recent recession has been particularly long, the pick-up in growth has been very slow. People tend to attribute the pitiful  state of the economy to the euro. The single currency doesn’t allow for currency devaluations and has imposed on most exporting companies to address shortcomings. It has also caused a bout of inflation as Italian authorities turned their head the other way as the changeover took place. Yet, curiously, 37% of Italians still believe that the euro is “the most important element that make up the European identity”, compared to 33% of Europeans. Therefore, looking for alternatives, one might think that the EU bashing by Italian politicians–former prime minister Silvio Berlusconi at the start of the decade and now current prime minister Matteo Renzi–is influencing the voters’ approach to the EU. Possible, but not fully convincing. I would argue that Italian euroscepticism is rooted in the fact that Italy, and perhaps also Greece, are the EU countries that face more than others a make-or-break modernization because of the EU membership. Helmut Schmidt, the former German Chancellor, used to say that Italians have eine selektive Anwendung des Gesetzes, a selective application of the law. Generally, the familistic and clientelistic ties of Italian society are increasingly incompatible with European integration, as most EU countries intend it. By pressing the country to reduce its public debt, the EU partners and institutions are asking Italians to reassess profoundly their social fabric, the way society works. The country is called to stop shelling money out to professional guilds, groups of interest, lobbies and political parties. After all, the high public debt–worth more than 130% of gross domestic product–is not solely the consequence of slow economic growth. It is the result of legalized kickbacks, lasting subsidies, tax evasion, organized crime in some regions, inefficiency in both the public administration and the private sector. It is the price to pay to please many, if not all, interest groups. According to figures provided by ISTAT, the Italian Statistics Institute, debt servicing has decreased very little since the introduction of the euro, despite a dramatic fall in interest rates: from 74 billion euros in 1999 to 68 billion euros in 2015. Over the last 15 years, governments have continued to increase public debt. Today, the lasting economic crisis–to which the high indebtedness has contributed by weighing on business activity–has reduced inevitably the amount of money that can be shelled out one way or another. Coupled with the EU pressure to reform and cut the public debt, this situation is provoking an increasing eurosceptic attitude as most Italians see the repeated calls for reform as a threat to their familistic interests.