The current government crisis in Italy has been simmering for some time.

The coalition supporting Mario Draghi since February of last year is extraordinarily broad. Parties joined forces from across the political spectrum because of the need to ensure some sort of political stability, and to allow the country to benefit from the post-pandemic Recovery Fund and its 200 billion euros allocated to Italy.

Drawing closer to the end of the legislature, political parties were bound to try and distance themselves from the government’s policies. The Five-Star Movement (M5S) has been steadily losing ground in the polls as well as MPs in Parliament (including the recent decision by Foreign Minister Luigi Di Maio to leave the party together with a number of deputies). Profiling itself became indispensable to avoid vanishing in outer space.

Today’s turmoil was probably triggered by rumours circulating at the end of June. Articles in the Italian press revealed that Mr  Draghi had spoken with Beppe Grillo, the populist founder of the M5S, and reportedly had told him to get rid of Giuseppe Conte, the party’s political leader and former prime minister. The government’s spokespeople denied the content of the conversation but admitted that the discussion between the two had taken place.

This episode shed new light on the prime minister’s figure. He was no longer seen as a technocrat, moved by altruism and public service, far removed from the secretive games of Italian politics. Suddenly, he appeared ambitious and vain, willing to come to terms with a long-time, often vulgar and unrefined comedian, far away from the distinguished people the US-trained economist is used to frequent.

Ultimately, Mr Draghi gave the impression of being willing, if not happy, to continue as prime minister of Italy following the upcoming elections.

This raised eyebrows in many political leaders. Not only the idea of a technocrat leading the government after the vote was unacceptable to many if not most, but they also saw Mr Draghi as being suddenly human, weak and above all blackmailable. Mr Conte decided that it was time to demand a change in government policies, as repeatedly requested by the M5S in recent months. Some would argue that his decision was also prompted by personal rivalry, in addition to the need of keeping his party together. 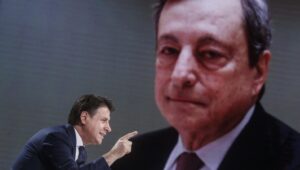 Following a series of inconclusive conversations between the two, the situation precipitated on Thursday after a vote in the Senate in which the M5S abstained. The majority supporting the executive is so broad that the vote was easily won by the government. Nonetheless, Mr Draghi decided to tender his resignation to the president of the Republic. Why?

Certainly, disenchantment towards the political class and tiredness in the job played a role in his decision. At the same time, he probably seeks to reassert power vis-à-vis the political parties, and especially the M5S. His resignation triggered new tensions in financial markets and broad reactions of support across the world. Mr Draghi made himself appear as indispensable, with the aim of forcing Mr Conte to retreat. There is little love between the two leaders and a tug-of-war has started.

What could happen now that the president of the Republic rejected Mr Draghi’s resignation?

Early elections are a clear possibility. How firm of a possibility it remains to be seen. The Italian political class is in tatters. The M5S hovers around 10% in the polls (down from 33% in the 2018 elections). The only party really benefiting from the current situation is the one not participating in the government of national unity, the rightist movement Fratelli d’Italia led by Giorgia Meloni.

The M5S will have to decide whether it is more advantageous to follow in Fratelli d’Italia’s footsteps or remain in the government, in the name of some sort of national interest. On the right, the Lega will have to make the same choice.

More generally, there is little appetite for early elections.

The Italian government has just asked the European Commission for a second tranche of EU money from the Recovery Fund. Italy’s Recovery Plan is a work in progress and the country is showing a traditional difficulty to spend the funds it receives from Brussels. Political stability with Mr Draghi at the helm of the country appears more necessary than ever.

Clearly, the current prime minister was able to form a broad majority because of his natural authority and international prestige and because of the delicate situation Italy found itself in, following the Covid-19 pandemic and as the country was negotiating its Recovery Plan in Brussels.

At the same time, parties across the political spectrum joined forces because all eyed a chunk of the 200-billion-euro Recovery Fund bonanza. After all, this less than noble aspect might be a crucial motive to allow the government to remain in charge until the end of the legislature, in early 2023.

#Italy in Turmoil – A Quick Interpretation for English-Language Readers https://bedaromano.blog.ilsole24ore.com/2022/07/15/italy-in-turmoil-a-quick-interpretation-for-english-language-readers/